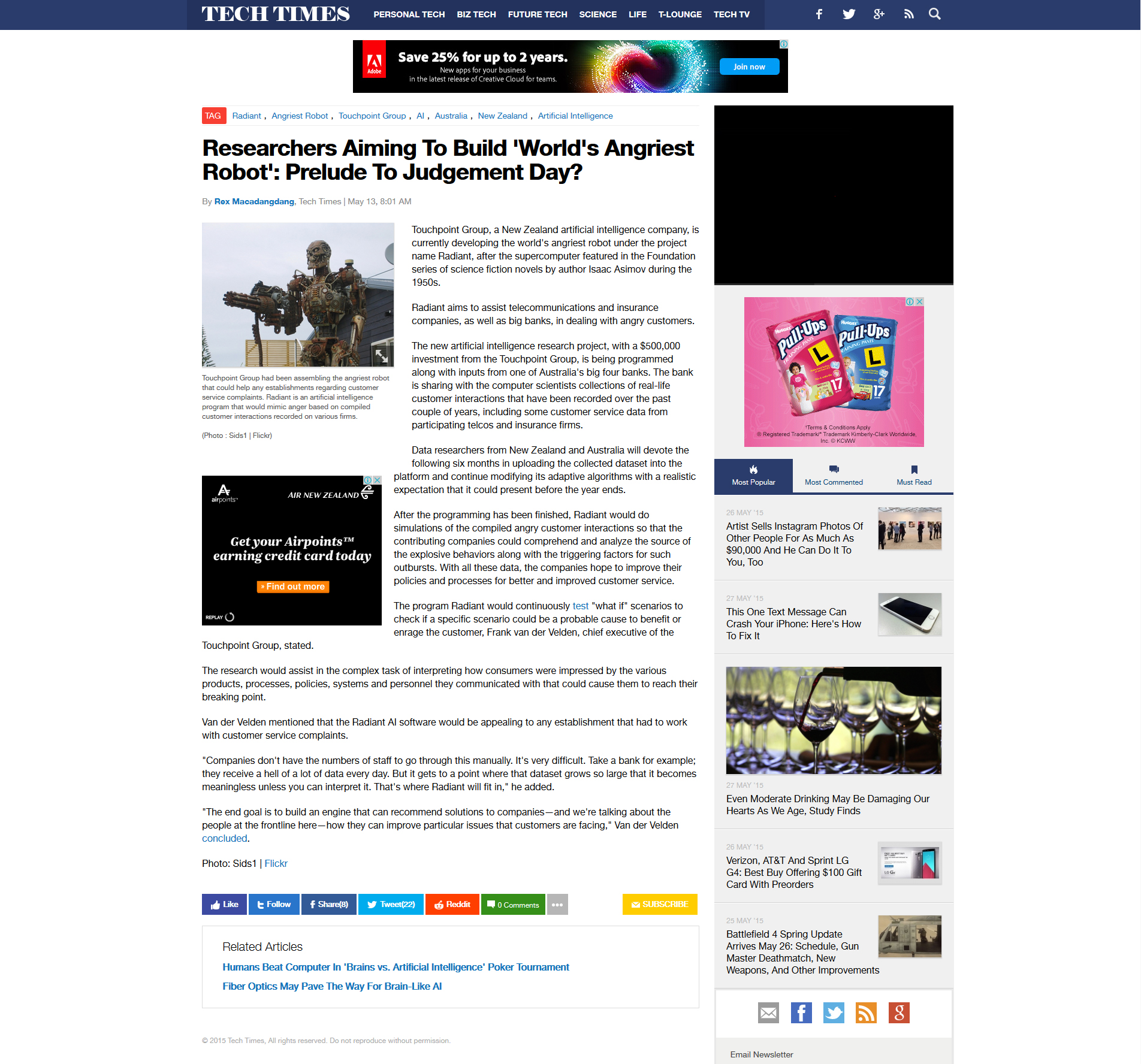 Touchpoint Group, a New Zealand artificial intelligence company, is currently developing the world's angriest robot under the project name Radiant, after the supercomputer featured in the Foundation series of science fiction novels by author Isaac Asimov during the 1950s.

Radiant aims to assist telecommunications and insurance companies, as well as big banks, in dealing with angry customers.

The new artificial intelligence research project, with a $500,000 investment from the Touchpoint Group, is being programmed along with inputs from one of Australia's big four banks. The bank is sharing with the computer scientists collections of real-life customer interactions that have been recorded over the past couple of years, including some customer service data from participating telcos and insurance firms.

Data researchers from New Zealand and Australia will devote the following six months in uploading the collected dataset into the platform and continue modifying its adaptive algorithms with a realistic expectation that it could present before the year ends.

After the programming has been finished, Radiant would do simulations of the compiled angry customer interactions so that the contributing companies could comprehend and analyze the source of the explosive behaviors along with the triggering factors for such outbursts. With all these data, the companies hope to improve their policies and processes for better and improved customer service.

The program Radiant would continuously test "what if" scenarios to check if a specific scenario could be a probable cause to benefit or enrage the customer, Frank van der Velden, chief executive of the Touchpoint Group, stated.

The research would assist in the complex task of interpreting how consumers were impressed by the various products, processes, policies, systems and personnel they communicated with that could cause them to reach their breaking point.

Van der Velden mentioned that the Radiant AI software would be appealing to any establishment that had to work with customer service complaints.

"Companies don't have the numbers of staff to go through this manually. It's very difficult. Take a bank for example; they receive a hell of a lot of data every day. But it gets to a point where that dataset grows so large that it becomes meaningless unless you can interpret it. That's where Radiant will fit in," he added.

"The end goal is to build an engine that can recommend solutions to companies—and we're talking about the people at the frontline here—how they can improve particular issues that customers are facing," Van der Velden concluded.